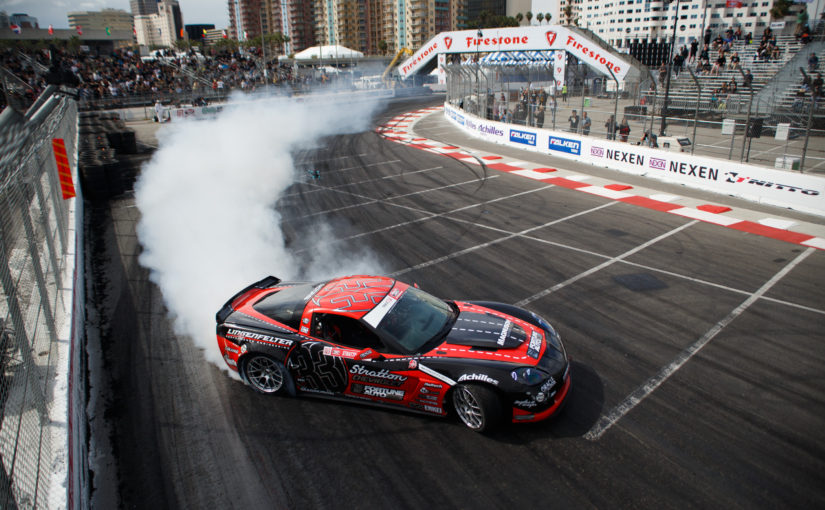 Dirk Stratton had his hands full at the Formula Drift 2019 season opener in Long Beach. After putting the whole right side of his Lingenfelter-powered C6 Corvette into the Turn 10 wall during practice, he, his dad, mom, and two buddies all began thrashing to fix the “Driftvette” before qualifying rounds began. These were the same people who originally helped build the car, and as a group, they maintain and modify it as needed during the racing season. “I built the transmission, rear ends, everything myself. It’s a long winter in Ohio and all of my buddies help me out,” said Dirk. As you can tell, Formula Drift (FD) is a family affair for team Stratton.

Growing up in a family of car enthusiasts, Dirk caught the racing bug at a young age. “I grew up traveling to all of the NHRA races with [my parents],” said Dirk. “I’d get all my homework from school and take it with me.” When he chose to go the drifting route and not follow in his family’s footsteps on the quarter-mile, it was a bit of a tough pill for Dirk’s parents to swallow. “This was hard for them to be ok with the decision. I did a full season of drifting at local events, and they never came.” But after seeing how much Dirk enjoyed the driving and after his father Don got to ride shotgun at full-lock a few times, the family couldn’t help but support Dirk’s racing efforts.

Dirk got his start in drifting in 2012. He was first exposed to the driving style while attending a motorcycle racing event that was running at the adjacent track. After getting a ride in a buddy’s car, he was hooked. His first drift car was a 1990 240SX hatchback into which he dropped a 5.3L LS engine. “We entered a competition in Michigan just to try it out. We had no idea what we were doing,” chuckled Dirk. “I showed up to grid with no spares- no extra tires or anything! LS Fest was my second competition ever and I podiumed.” As he got more serious about competition Dirk got involved in the Midwest Drift Union, a feeder series for drivers trying to get into FD. His S-chassis lasted for a time, but he got to the point where he either wanted to completely rebuild it or start on a fresh platform.

Since 1928, the Stratton family has owned Stratton Chevrolet in Boyd, Ohio, making Dirk the fourth generation of the family involved in the business. When he decided to switch to a new chassis, he didn’t have to look far for the 2009 C6 he’s driving now. “The Corvette made the most sense,” said Dirk. “It’s a sports car right off the bat. You can build it simple, and it works well.” It may be simple when compared to other FD cars, however, this is the same car he drove to qualify for his FD Pro 2 license, as well as the car he used to win Pro 2 Rookie of the Year in 2017 and Pro Rookie of the Year in 2018. All the while, the car has been upgraded as his driving improves, allowing him to remain competitive with the rest of the grid.